Art and a Signature

At Home Shops we want to emphasize that well done freelance rolling stock and locomotives are valuable works of art in their own right. To that end, the most important element of a completed work of art is the artist’s signature.

The signature conveys that the artist has completed the work of art and that the artist is satisfied, or better yet proud of, the piece. Signatures should be clearly legible and placed on ALL completed works of art. The signature ensures that as the work takes on a life of its own, people who encounter it will know its origin and thusly its value.

Much like the anonymous artist, there are many freelance model railroaders who do not share their work on social media. Some may not even tell close peers in the hobby what they have created. Evidence of this can be seen as people post inquiries on Facebook about the origins of freelance equipment that surfaces, often times after the creator has passed.

Some recent examples include inquiries about a freelance Buffalo Terminal railroad when locomotives appeared on eBay as well as questions about Oklahoma Northern equipment that was part of an estate sale. Just like these unknown locomotives and cars, many great works of art exist undervalued and unrecognized because they were never signed by their artist. 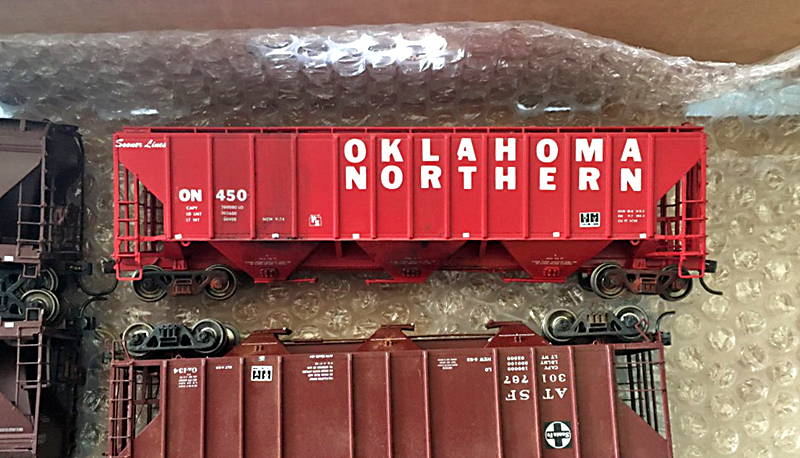 Photo of a Freelance Oklahoma Northern freight car in an estate sale collection!  This freelance railroad belonged to the late Bob Miller.  Only those who knew him personally had knowledge of the railroad.  Photo by Dan Munson.

So how are Home Shops limited edition freelance rolling stock and locomotives “signed”? Well obviously an actual “signature” on the equipment could ruin the realism that was designed into the appearance of the cars. Of course being freelancers ourselves, we have creativity! The answer for the first Home Shops release was to embed the owner’s name in the trust stenciling!

Most railroad equipment is not purchased outright by the “owning” railroad or equipment entity. For the period represented by the PS-4750’s in the first Home Shops release, these cars were leased or otherwise financed. Stenciling outlining the general details of the financial arrangement is painted on the cars.

“OWNERSHIP OF THIS CAR BY BRIAN G BANNA FILED UNDER A SECURITY AGREEMENT WITH THE I.C.C. UNDER SECTION 20(C) OF THE INTERSTATE COMMERCE ACT”

The Stencil Block hi-lighted in the yellow circle is the "Signature" of artist Brian Banna that will be present on the Copper State Railway PS-4750 covered hopper cars in the first Home Shops run!  Notice how it is designed to blend right in with the other markings.

So now, wherever these cars may show up as ownership changes hands over time, there is the “artists’ signature” on the car, giving people who may not otherwise be familiar with the Copper State Railway a clue as to its origins!